POLYCAST® polymer or Vinyl Ester concrete systems with stainless steel edging and grates are a good alternative to stainless steel channel bodies.  Polymer channels are chemically inert and resistant to high temperatures.  This series is perfect for breweries and other industries that experience extreme conditions.

Hubbell’s Polycast 700 Series is the logical trench drain choice for heavy duty applications with constant fork trucks or heavy equipment.  The Polycast 700 features 6.25″ wide (OD) polymer concrete channels with a 0.6% built-in slope that offers flow rates of 470 GPM.  Polycast 700 is based on the 600 series channel, and so shares many of the features that make Polycast 600 a prominent small commercial drain. 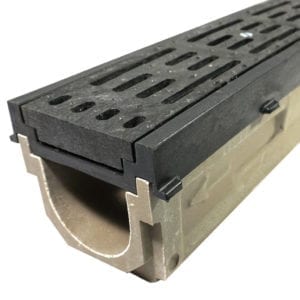 Add durability and chemical resistance to your polymer trench drain with the Polycast 700pe HDPE frame.  Install the DG0700PE HDPE frame with reinforced stainless steel or fiberglass grating to make a high load capacity, inert drainage surface.  Or, couple the HDPE frame with a cast or ductile iron slotted grate to unlock Class E loadbearing capable of standing up to fork truck traffic. POLYCAST® end caps are used to enclose or provide piping transitions to outlet or inlet ends of the channel whenever catch basins are not being used. End caps output to a 4″ pipe. Material is acrylonitrile butadiene styrene (ABS) plastic. Installation chairs are the most efficient and economical means of setting a precast trench system.  The installation chair supports the ends of the channel, aligns and locks the joints rigidly together, and prevents the channels from floating.  Adjusting channel elevation is easy.  One chair is required for every joint.  Each chair is made from 1018 hot rolled steel and has a zinc plated finish.